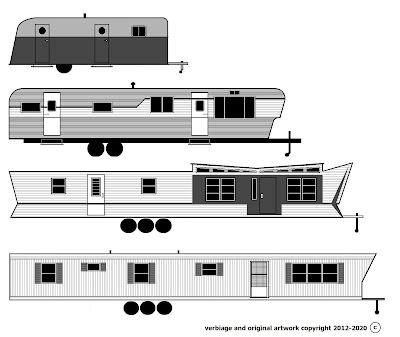 Welcome to PORTABLE LEVITTOWN, a homage to the post-war house on wheels and the folk who lived in them. These stylish rolling abodes were a mobile counterpart to the mass-produced tract house suburbs that were built in America during the mid-20th century.
No comments: 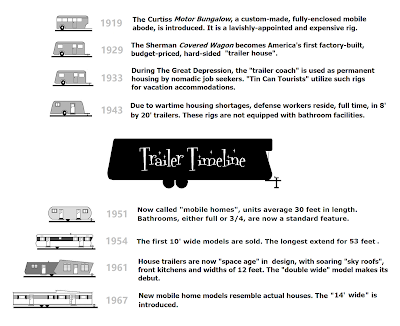 Click on image for a larger view.
No comments:

Although PORTABLE LEVITTOWN pertains specifically to the American house trailer of the mid-20th century, their early evolution does merit a perfunctory mention.

The history of the camping trailer and mobile home can be traced back to the Romani caravans of Europe and, specifically, to the American Conestoga Wagon, whose first recorded mention dates back to 1717.

The typical Conestoga Wagon was 18 feet in length and 4 feet in width. Its bottom was curved to keep cargo from shifting or falling out.  The average speed of this mode of transport was 15 miles per day.
Drawing from Wikipedia / Achive of Pearson Scott Foresman

The world's first so-called leisure travel home made its debut in Great Britain, in 1885. Known as The Wanderer, it was built for Scotsman William Gordon Stables, a well-known doctor and author.

Stables used The Wanderer to travel throughout Great Britain. He published his experiences in his 1891 book, "The Gentleman Gipsy". 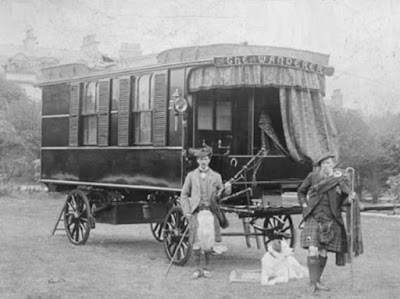 William Gordon Stables (on the right) poses in front of The Wanderer. The horse-drawn abode was 30 feet long and 7 feet wide. It was appointed in the most opulent of Victorian decor.
Photo from www.caravanclub.co.uk
No comments:

We pick up our early history of the mobile home back in the United States.  By the turn of the 20th century, several developments were in motion that would result in the birth of the house and camping trailer industry.

Motorized transportation was beginning to replace the horse-drawn method by 1900. Moreover, paved highways had started to link cities and towns across the nation. The grueling 7-day, 80-hour schedule was being shortened to the standard, 5-day, 40-hour work week. This made the first common-folk vacations possible.

Lastly, the formation of the National Park Service, in August 1916, was establishing vast stretches of unspoiled forested land where such vacations could be enjoyed by the masses. In order to do so, makeshift, home-made "trailer houses" were hastily assembled, which could be towed by that new Ford Model T.

Soon, American industry was exploiting the trend. The first factory-made "trailer house" was devised by New York's Glenn H. Curtiss, whose Motor Bungalow debuted in 1919. However, it was a lavishly-appointed, luxury item affordable only to those of means. 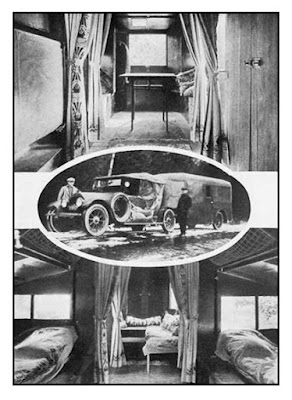 In this vintage advert, we see the 1921 Curtiss Motor Bungalow. It was, in essence, the world's first "fifth wheel" -type travel trailer.
Photo from http://www.coachbuilt.com

The next mobile home milestone occurred in the late 1920s. Indiana's Arthur G. Sherman developed the first affordable, hard-sided (in opposition to a tent) trailer house.

Sherman presented his first Covered Wagon model at a 1929 auto show in Detroit and received orders for one hundred and eighteen initial units. Soon, his Covered Wagon Company would dominate the fledgling American trailer industry. 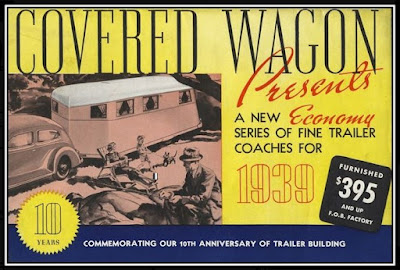 An advert promoting the "10th Anniversary" Covered Wagon coach. Note the price...only $395!
Graphic from http://www.doityourselfrv.com (Do It Yourself RV)
No comments:

In a 1930s "trailer coach" everything was built-in. Seating areas and kitchen facilities were stationary, as were sleeping accommodations. The "rig" might even include a heating unit or furnace. 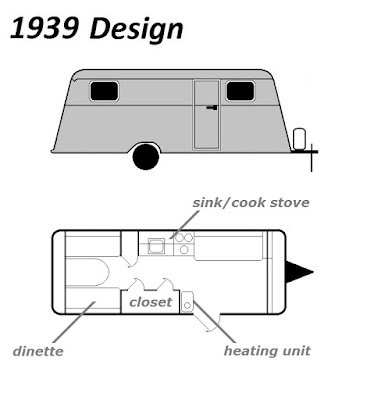 This illustration depicts a "trailer coach", circa-1939. The typical rig was 8 feet wide, 16 feet long, and did not have a bathroom. This feature would not become standard equipment until several years later.

The social upheaval of The Great Depression caused a marked shift in the American perception of a trailer coach. In the years before 1930, a mobile abode was seen as a symbol of leisure, prosperity and adventure.

As the economy worsened, thousands lost their jobs and began roaming the country, trailer coach in tow, seeking whatever work was available. 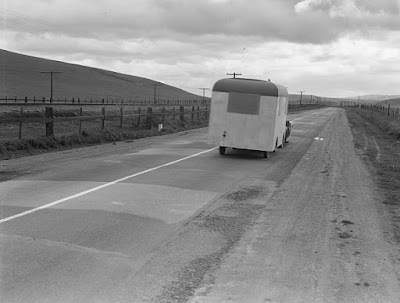 A Tin Lizzie and trailer head down US Highway 101, near King City, California. The date,  February 1936.
Photo from Library of Congress / Dorothea Lange

These rigs, originally designed for sporadic use, were having to provide accommodations year-round. Many took on a shoddy and worn-out appearance.

Meanwhile, the first trailer parks, or "auto camps", had been established in bucolic surroundings, often near lakes or National Parks. A host of amenities were often provided.

By the mid-1930s, such facilities were being hastily created on the outskirts of cities, where migrant residents were crowded together, in squalid conditions, with little or no services to speak of.

Such settlements, often derided as "Hoovervilles", incited the ire of local governments. Trailer coach dwellers, once viewed as tourists, were now labeled as hobos or vagabonds. 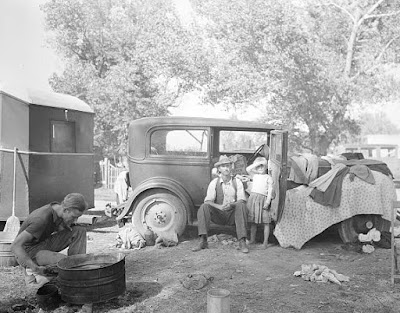 The global conflict of the first half of the 1940s created a pronounced housing shortage and mass market for the trailer coach. In the flurry to supply wartime housing for defense plant workers, rigs were built out of whatever materials were available. 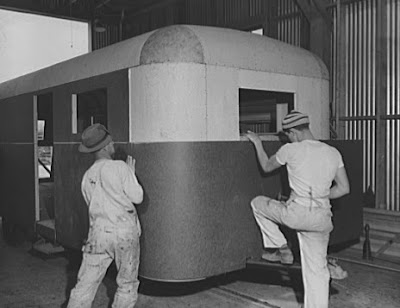 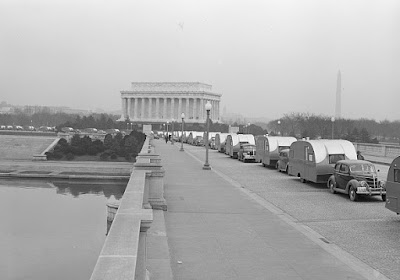 In an image dating to March 1941, a trailer caravan crosses the Potomac River into Virginia.
Photo from Library of Congress / Roydan Dixon

A negative image of trailer life, fostered by the economic crash of the 1930s, was refueled by the perception of the emergency wartime trailer as a slipshod and second-rate housing option.

At the same time, the big promotional buzz word of the 1940s was LIVEABILITY. There could be "room to spare" in quarters no larger that 200 square feet...or so an advertisement of the time might have said. 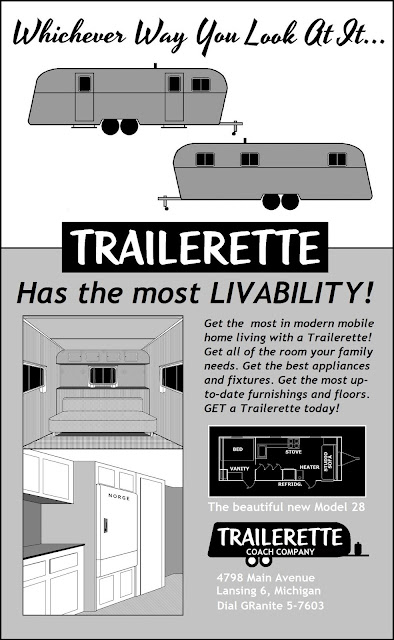 With a severe housing shortage at hand, a mid-century family was thankful, indeed, to have a tiny, cramped trailer coach to call home. 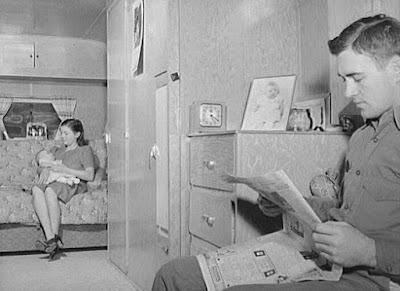 A snapshot from February 1942 shows a trailerite family who live at the Farm Security Administration's Sunnyside trailer camp. The father works at the adjacent Burlington, Iowa defense plant.
Photo from Library of Congress / John Vachon

Naturally, super-compact designs made sure that every inch of interior space was used in the most efficient manner possible! 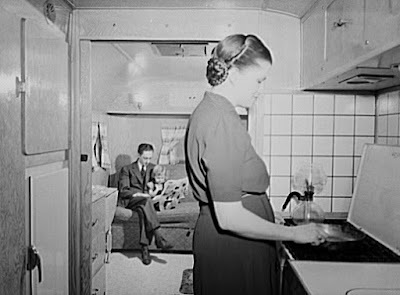 Here we see another wartime trailerite family. The father is also employed at the Burlington, Iowa facility.
Photo from Library of Congress / John Vachon 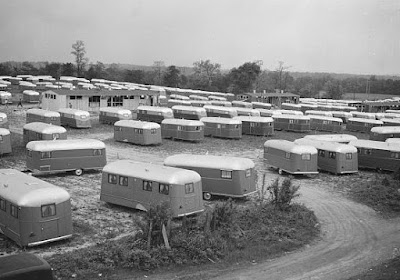 In this image from May 1941, we view a Farm Security Administration trailer camp, which houses workers at a Nashville, Tennessee defense plant.
Photo from Library of Congress / Peter Saeker

The American public's negative house trailer perception began to improve after the war. Superbly-crafted coaches were being built by manufacturers such as Schult, Spartan and, eventually, Detroiter. These, and other well-built rigs, were marketed to returning GIs and their wives as a quick and economical way to achieve the American Dream of home ownership. 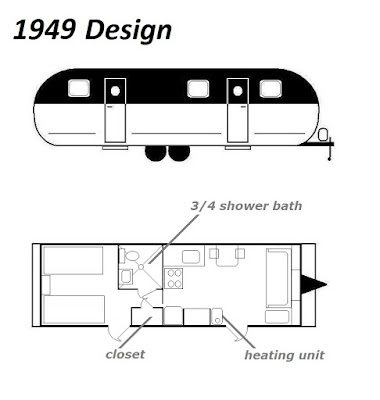 A typical post-war unit is depicted above. Now officially known as "mobile homes", rigs extend for up to 40 feet, with the standard width being 8 feet.

In the late 1940s, bathroom facilities were available in a new mobile home, but were a deluxe feature. If there was a bathroom, it probably wasn't a complete one, with commode, lavatory and bath tub.

3/4, or "shower baths" became a standard mobile home component with the 1951 model year. By the mid-1950s, most newly-built rigs included a full bathroom.
No comments:

In the years following World War II, America experienced the largest -and longest-lasting- economic expansion in its history. During these "boom" years, a favorite way to pass the time was to attend one of the many mobile home shows that were being held in venues across the nation. 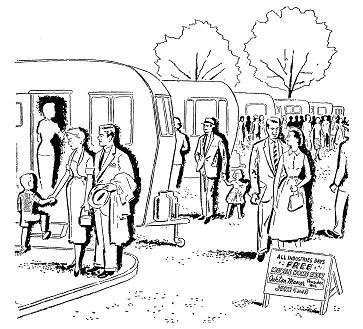 A "Parade Of Homes" mobile home show, circa 1953. An outdoor event is depicted here, but many were held indoors in arenas and exhibition centers. Later, as shopping plazas began dotting the suburban landscape, shows would be set up in their vast parking areas.
Drawing from the Milwaukee Sentinel 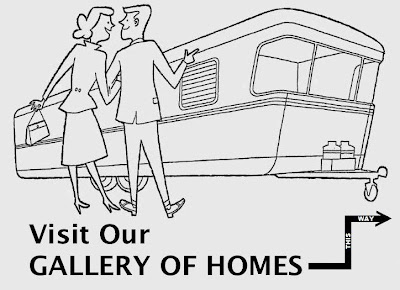 A mid-century Mr. & Mrs. find the (mobile) home of their dreams at a "Parade of Homes" exhibition.
Drawing from the Milwaukee Sentinel 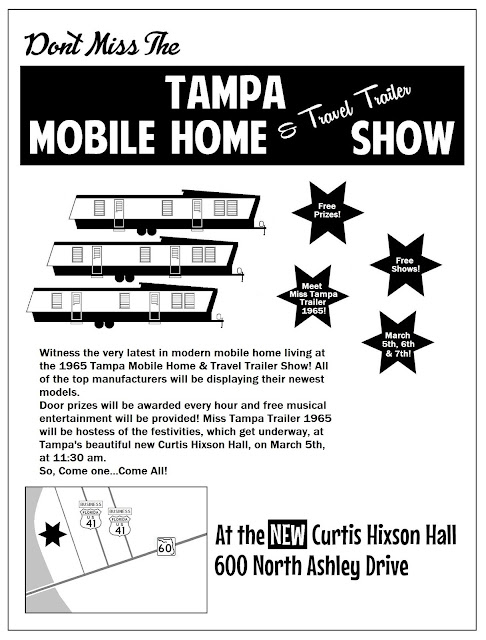 This graphic, a re-creation of a mid-20th century mobile home show advert, is typical of the time.

Follow along as we present a visual history of the mobile home in America. 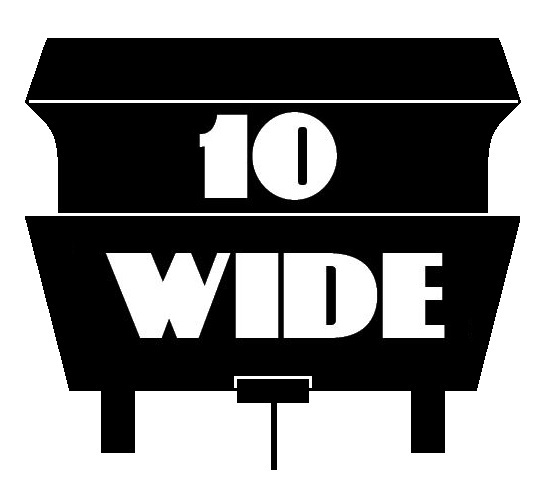 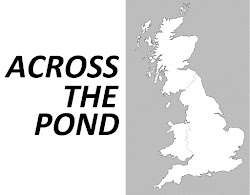 A look at mobile homes, as they have evolved in the United Kingdom (click on image above)

Actually, including that, as well. A study of the mid-20th century mobile home kitchen; its locations, layout, features and furnishings

Or The Long, Long -and Much Wider- Trailer. A short feature about the debuts of the first 10 & 12 -wide mobile homes 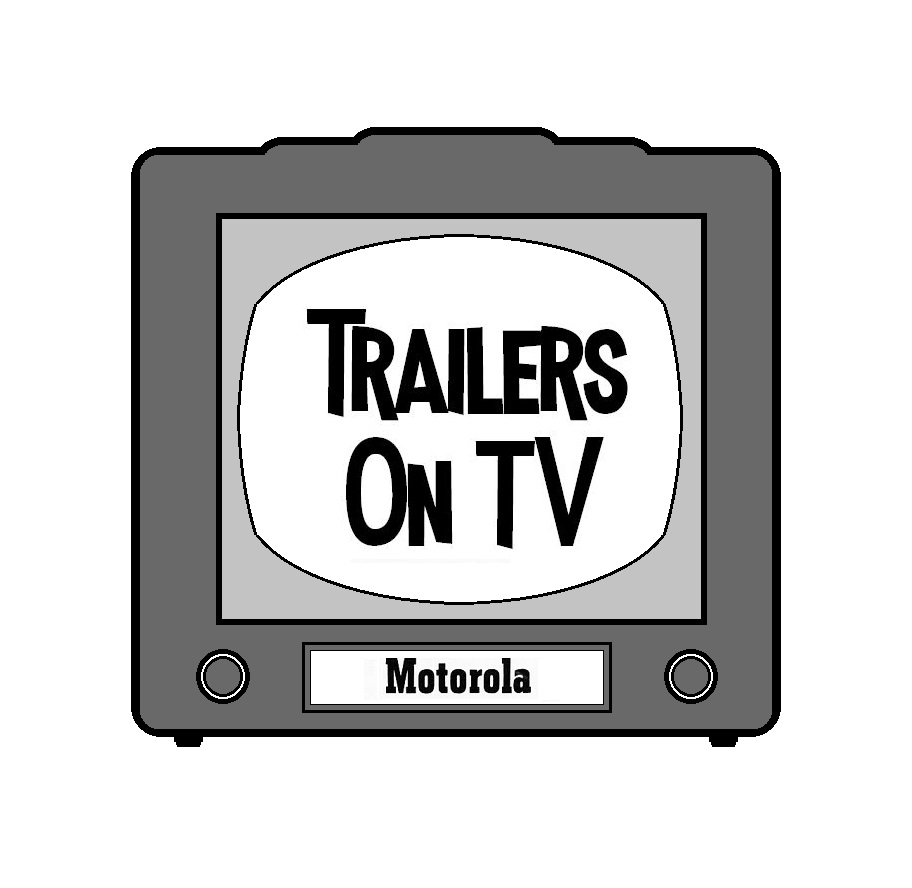 A listing of classic TV show episodes that feature a vintage mobile home, or homes

A Mobile Home Make Over

Details, drawings and photos chronicle the renovation of a circa-1958 house trailer

Links To Other House Trailer-Type Websites

Links To Our Companion Websites